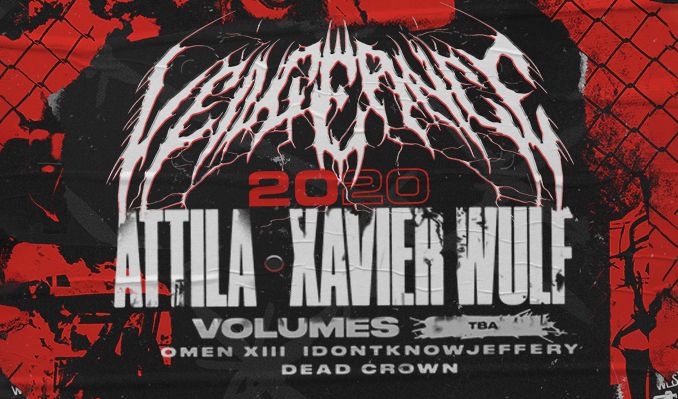 This show has been postponed. Ticketholders will be notified when new show information is announced. Thank you for your patience.

It’s been far too long since a heavy metal band could get the party started the way Attila can. Drinks will be pounded down, blunts will be blown, panties will be thrown, and everyone will have the time of their lives once the Atlanta quintet’s sixth full-length album, Guilty Pleasure [Artery Recordings/Razor & Tie], pipes through the speakers. Hell, you don’t even have to admit you love it—hence the title—but we know you will (or at least your girlfriend will)…

2013 became a landmark year for the group—Chris “Fronz” Fronzak [lead vocals], Chris Linck [guitar], Nate Salameh [guitar], Kalan Blehm [bass guitar, backing vocals], and Sean Heenan [drums]. Their fifth offering, About That Life, snatched #22 on the Billboard Top 200, #5 on the Independent Chart, #4 on the Hard Music Chart, and #5 on the Rock Chart, moving over 14,200 copies first week. In the midst of sold out headline shows around the States, the band began working on what would become Guilty Pleasure at the end of the year. This time around, Fronz possessed a clear vision that included embracing seven-string guitars, adopting lower tunings, and nodding to turn-of-the-century classics from Slipknot, Korn, and Limp Bizkit.

“We’re never going to write the same album twice,” he declares. “We’re always going to maintain our sound and style, but we bring something new to the table for our fans to keep it fresh and interesting. Lyrically, I expanded. It’s not all about partying and being crazy. I touched on some real shit. I dropped some knowledge. I wanted to be more real because I owe it to our audience. The songs are more meaningful.”

Once again, the boys retreated to the studio with Joey Sturgis [Asking Alexandria, Of Mice & Men] in Michigan. Together, they amped up everything across the board.

“It’s a heavier and more fun Attila,” smiles Fronz. “It’s rap metal at its finest. There are elements from our older albums as well as new flavors.”

That’s apparent on the first single “Proving Grounds”. The guys ignite an atomic hook bolstered by succinct riffing and a percussive slam. “’Proving Grounds’ are areas that the government would test nuclear and atomic bombs,” he goes on. “Anyone can relate to this because we all have doubters. You have to take that doubt and leverage it do better. Proving people wrong is the ultimate satisfaction.”

On “Rebel”, Fronz spits incendiary bars over a barrage of chugging jackhammer guitars. Everything culminates on an anthemic refrain that’s equally ballsy and blistering.

“It’s about being yourself, doing what you love, and not giving a fuck about what authorities, parents, or people tell you that you’re supposed to do,” he proclaims. “That’s an important message. You can’t always live by the rules. If you really want to do something, you just have to do it. I want to encourage kids to use their ambition and do what they love.”

Then, there’s “Horsepig”. Boasting brash delivery and another sizable groove, it’s a special one for Fronz as it proved to be a family affair. “My three-year-old son actually named that song,” he admits. “One day, I showed him a flashcard of a warthog. He knew what it was, but he wanted to change the name to ‘Horsepig’ since a warthog looks like a horse and a pig. Later that day, we wrote the song, and I had to use the word he invented for its title.”

Along the way, Attila have turned “party metal” into a bona fide art form. Formed in 2005, they’ve continually clawed their way towards heavy music domination. In addition to being a headliner on Warped Tour 2014 and touring alongside everybody from Suicide Silence to Asking Alexandria and Memphis May Fire, these mayhem mavens have sold over 100,000 records to date. They’re preaching a new kind of gospel too…

“Our generation is killing rock ‘n’ roll by writing all of this pussy-ass music,” he leaves off. “This kind of music is about breaking the rules and pushing the limits. That’s what Attila has done and we will continue to do. We’re breaking rules. We don’t give a fuck if people like us or not. We’re doing what we love and having the time of our loves. The world needs that. We’re happy to be your outlet. Have a fucking blast. We’re your Guilty Pleasure.”

FacebookTwitter
*Service and handling fees are added to the price of each ticket.