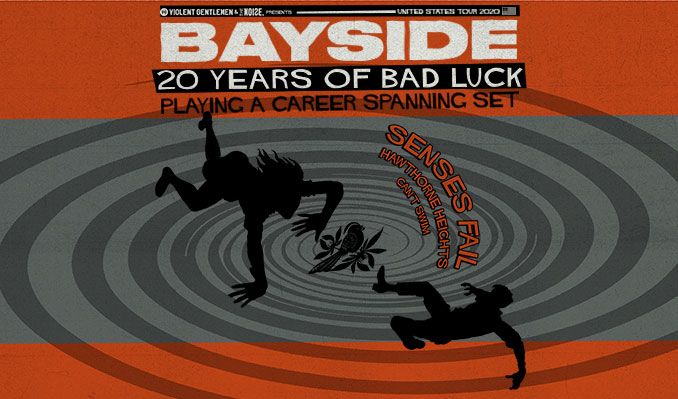 For the past 20 years, the Queens-based, BAYSIDE, has represented a lifestyle, a counterculture, and a deeply held conviction, diverse in thought and background but united by a shared desire for authentic expression. At their core, BAYSIDE is a band that has constantly proved that music is not about gimmicks and ephemeral trends, but a timeless reflection of our lives and our times. It is through this timelessness and consistency that BAYSIDE continues to cultivate a cult-following that lives and breathes everything the band creates.

After 2018’s hugely-successful melody/arrangement-driven, acoustic album and tour, Acoustic Volume 2, BAYSIDE explored what a BAYSIDE song could be. These weren’t “stripped down” versions of BAYSIDE songs so much as they are completely new discoveries, refashioned and broadened by possibility. The shows were not “quieter” or “mellow” affairs, but raucous sing-alongs that stretched the bands’ musicianship and vocal chords and invigorated the band as they headed the studio to record their eighth studio full-length, Interrobang.

Interrobang is a punctuation mark that combines an exclamation and a question mark. For Anthony Raneri, BAYSIDE’s frontman/lead vocals/guitar, the title represents the feelings the album invokes from the listener. “We wanted the record to feel exciting and new, but also sound like a natural progression for the band,” Raneri explains, “We just wanted to keep the listener on their toes - there is a ton of information being thrown out - and if you want to take it all in - you can’t stop paying attention for a second.” The result is the heaviest rock album of the band’s career juxtaposed with the most catchy, melodic hooks the band’s ever created.

On the title track, “Interrobang,” Raneri along with lead guitarist Jack O’Shea, bassist Nick Ghanbarian, and drummer Chris Guglielmo focused on opening the album with a song that was equal parts exciting/fun and wild/unpredictable. “It has always been important to us to sound like Bayside, but always shake it up with each record. We tried to think outside the box and take things further, Raneri adds. With big echo-y rock drums and a classically haunting guitar solo, the song spins the listener in a few different directions, while planting its feet firmly with Raneri’s smooth vocals.

Working with acclaimed producer, Cameron Webb (NOFX, Motorhead, Alkaline Trio), BAYSIDE embraced the eclectic resume of Webb and pushed the boundaries of what a Bayside song could sound like. “Cameron (Webb) has worked with a really wide range of artists, from NOFX and Lagwagon to Kelly Clarkson to Motorhead and Megadeth,” Raneri shared, “We thought it would be perfect to work with (him) because we see ourselves as sitting somewhere in between all of those artists.”

BAYSIDE has always focused on creating songs that are relevant to people who want substance, rather than being relegated to one genre. With Interrobang, the band has put together an eclectic, inspiring, and bold collection of songs. Raneri shares, “Love it or hate it, we wanted the record to invoke something in people. We said with this record we either wanted to create something great or fall on our faces. Negative or positive, we just didn’t want the record to be ‘fine.’” While many bands would coast on their past success, BAYSIDE rejects the premise and proves with Interrobang, that the best is yet to come.

Official WebsiteTwitterYouTubeMySpaceFacebookAmazonMore Info
*Service and handling fees are added to the price of each ticket.