Falling In Reverse: The Drug In Me Is Gold Tour

Escape the Fate, The Word Alive 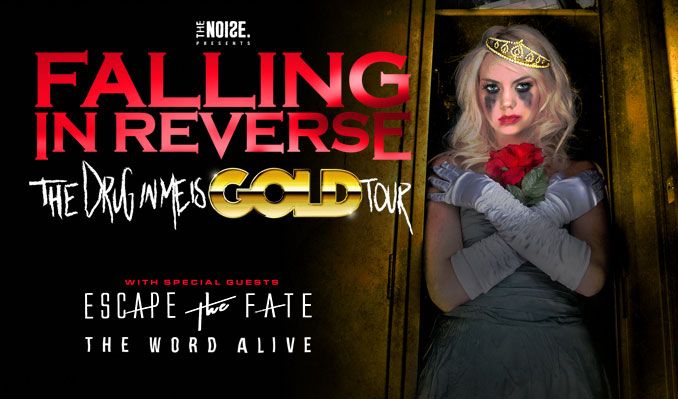 Fact: the most engaging, most electric artists will always generate the most visceral reaction. Loved, hated, ridiculed, admired, FALLING IN REVERSE frontman Ronnie Radke is the rare rock n’ roll provocateur whose unpolished unpredictability and reckless honesty make him equal parts hero and villain, depending on whom you ask. Radke puts it all on the line, take it or leave it, each and every time Falling In Reverse does anything. Just Like You finds Falling In Reverse’s leader with no shortage of material to sing, scream and howl about. In the roughly two years since Fashionably Late, Radke lost a close family member (faced head-on with the tear-jerking album closing ballad, “Brother”), watched old friends succumb to old vices (look no further than the first track, “Chemical Prisoner”), and struggled with his lifelong search for meaning (“God if You Are Above…” is as real as it gets, kids) and search for personal redemption. Just as Pinocchio became a real boy, Falling In Reverse is a real band. Emerging guitar hero Jacky Vincent throws down a vicious, Joe Satriani-inspired shred all over their songs; rhythm guitarist Derek Jones injects the band with the strength of crunch that only comes from touring as a metalcore vet. Jovial everyman drummer Ryan Seaman, whose resume reads like an Epitaph catalog, lays back in the cut like the guys in classic hard rock bands of the ‘70s yet pulls off double bass and crazy fills with equal skill. “God, If You Are Above” rocketed to #1 on the iTunes Rock chart within hours of its release and with good reason. It’s got an energized, emotive drive reminiscent of “Situations” (the best known song from Radke’s tenure in Escape The Fate which has been viewed 44 million times on YouTube) but updated with the experience, charisma and perspective of the singer’s more well rounded modern persona; the song is naturally topped off by a reliably scorching Jacky Vincent solo. The playful innuendo is still there, in party songs like “Sexy Drug” and the album’s title track, “Just Like You,” with it’s over-the-top, hilariously brave refrain: “I am aware that I am an asshole!”

Falling In Reverse’s debut album, The Drug in Me is You was a vivid, self-deprecating, raw document of frontman Radke’s turbocharged life till that point, delivered with a clever wordplay acting as harbinger for the mixtape rhymes that were to come. Now, the appropriately titled Just Like You draws together all of the first two album’s strengths. Falling In Reverse single-handedly revived the Artist Of The Year designation in Alternative Press. In 2014, only Motörhead legend Lemmy edged out Radke on Kerrang!’s list of the 50 Greatest Living Rockstars in the World, a lineup that included the likes of Slash, Steven Tyler and Ozzy Osbourne. Ronnie Radke is the world’s Greatest Living Rockstar, aside from freakin’ Lemmy, according to the UK’s biggest rock mag.

Radke’s aesthetic is so coveted he spends significant “free time” overseeing clothing design and fulfillment. Self-empowerment, secret societies and a bizarre amalgamation of esotericism and West Coast gangsterism collide in HOOD$ UP, the Falling In Reverse frontman’s apparel endeavor that transcends “brand” as much as the guys in Falling In Reverse have managed to agitate and captivate more than a “band.” As unscrupulous imitators play catch-up with the look, sound and feel of Falling In Reverse, the band soldiers on, blazing new pathways and bridging the gap between brutal metal and pop rock.

MySpaceOfficial WebsiteTwitterFacebookFan ClubYouTube
*Service and handling fees are added to the price of each ticket.